Here is the first blog assignment for Geography of Fictional Worlds. The assignment is to use the information in this blog entry to assess the habitability conditions on this terrestrial world. Please reference the lecture notes for essential components that you must asses, including, star type; distance; rotation, axial tilt; composition; ice/water/land ratios; atmosphere; gravity; magnetism; tidal impacts etc. 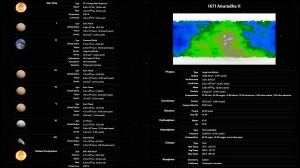